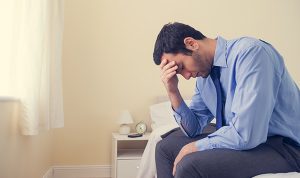 Depression has been likened to living in a black bag. Life is dark, sad and isolated; but there may be a way to lift that black bag from off of your head and live life with a smile once again.

If you’re a snorer and stop breathing for regular short intervals during sleep, you may be suffering from sleep apnea. If you’ve been diagnosed and are not wearing CPAP therapy, you may be avoiding the very thing that could change your life and make you feel great again.

Obstructive sleep apnea (OSA) is a condition that generally involves repeated upper airway obstruction during sleep. The jaw sinks into the throat, closing off the ability to breathe. Frequent sleep disturbance, waking and oxygen deprivation results.

Insomnia, daytime sleepiness, irritability, high blood pressure, diabetes, cardiovascular disease, poor memory, weight gain and as well as risk of death from a stroke are some of the issues associated with untreated OSA. Depression, leading to a decreased quality of life is prevalent among sufferers.

Using a CPAP device to restore regular breathing during sleep may reduce or eradicate issues of depression, as well as many of the other associated symptoms.

According to lead author Dr. Marcus Povitz of Western University in London, Ontario, Canada, “It’s thought that sleep apnea could contribute to depression through its effects on sleep quality as sleep fragmentation occurs from the frequent apnea events, but this hasn’t been proven experimentally.” In an e-mail interview with Reuters Health, he said, “Also there is a hypothesis that the dips in oxygen due to the apneas might cause injury to the brain which could lead to depression.”

Dramatic relief from depression following sleep apnea treatment has been reported by many sleep physicians.

Dr. Richard Leung, assistant professor at the University of Toronto, said in a Reuters Health article, “It has been recognized for a long time that sleep apnea and depression often coexist in the same patient, but nobody really knows the reason.”

The new review of evidence connecting sleep apnea with depression, would indicate that untreated sleep apnea may at least partially contribute to issues of depression in sufferers.

Posted in Advice, Face Cozy, News, Sleep Cozy
← The Biggest Turn-Off While You’re Sleeping Could be Deadly!Good News for CPAP Users in Mexico! →